I've wanted to "light up" my truck for a while now, and I've been playing with different ideas. I had blue underbody lighting and marker lights on my old Navara, so I decided to go with some underbody lighting again. I decided on amber lighting this time because I'm tired of blue, and every boy racer has blue side lamps now.
I bought the LED strip lights on eBay and simply cable-tied them to the chassis, and extended the wires to the engine bay. Instead of marker lights, I wanted to do something different, so I decided to light the engine bay in a way that the intercooler and radiator would be visible through the grill at night.
The LED strips were just thick enough to fit into the centre horizontal "bar" of the lower grill with some doublesided foam tape. I drilled two tiny holes in the upper grill to loop two cable-ties into and hold the upper strip.

Saw this photo opportunity last night and pulled in to take the photo: 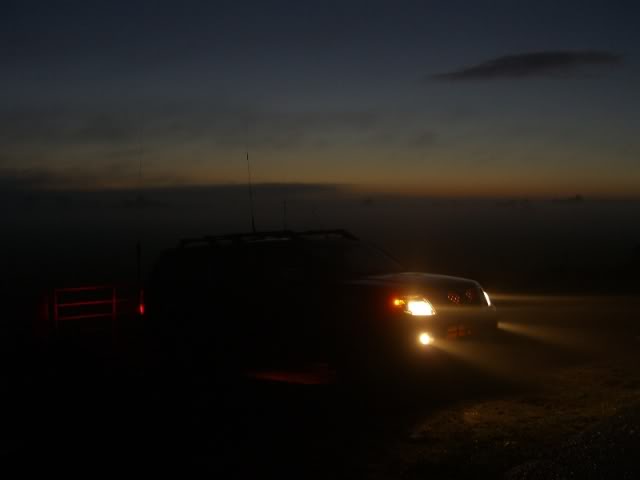 Edit: It's not as obvious at that size, but there is a thick fog covering everything behind the truck, with some trees poking out here and there.

This is my favourite part:


I wired the LED lights to the puddle lights so that they light up when I unlock the truck. I had done the same with my old truck, so it didn't take as much figuring out this time. I remembered from the last time that the puddle lights are not switched off by lowering the live feed to 0v, but by rising the ground to 12v. Therefore, I had to wire the positive for the lights directly to the battery (through a fuse), and break the ground to switch them on and off. To do this, I used a relay to make and break the ground, and wired the relay to switch on with the parking lights.

I took a second ground wire from the amber lights to the puddle lights, with a diode in line to prevent the puddle lights from switching on when I turn on my parking lights. Wiring it this way means the lights will fade out with the puddle lights rather than just switch off, as they would if I had used a relay.

Being more specific: I connected a yellow wire to the ground connection of the amber lights, and fed it through the bulk head by piercing a hole in the rubber gland where the bonnet release cable comes through.

I wired this yellow wire into a circuit I'd prepared in advance:

I connected the "To the parking lights" (red) wire to the backlight of the mirror adjustment switch (The white wire on that connector) and the "To Ground" (black) to the ground for the same light (Black wire on the connector):

I connected the "To the puddle lights" (blue) wire to the ground wire of the footwell light:

I put a toggle switch on the "To the Amber Lights" (yellow) wire so that I can switch off the Amber lights if I want. I stuck the control box under the dash using double sided foam tape, just beside the driver's footwell light, where I can easily reach it, but it's not in view.

I have found one fault with wiring the lights this way: If I turn on one of the interior lights (by clicking it upwards), leave it on and lock the truck. After a while (when the interior light should automatically switch off), the amber lights illuminate dimly and the interior light dims to a dull glow rather than switch off. I'm guessing that this is something to do with the puddle light ground "floating", rather than being switched off. My old truck used to do the same. I will investigate at a later date, but I'm not bothered by it as the slight leakage isn't enough to drain the battery by any means.