One of the most important pieces of equipment for camping is a light. It's the third thing on my list, after the tent and sleeping bag. Until recently, I only used a normal hand-held torch while camping. I could manage with just a hand-held torch but it was awkward for tasks that need both hands, such as erecting the tent or cooking. I had to either hold the torch in my mouth or prop it up on something, so that it was pointing at what I needed to see. I found this to be a particular disadvantage after I changed my tent to a Snugpak Bunker because the inner tent is black, so it absorbs light rather than reflecting it. It eventually occurred to me about a year ago that a camping lantern would solve this problem.

Nitecore recently sent their new LA10 camping lantern to me to review. The LA10 has a maximum output of 135 lumens, a beam diameter of 10m, is impact resistant to falls from up to 1.5m and is IPX6 rated (resistant to powerful jets of water from any direction). It weighs 42.7g (67g including battery and lanyard). It has three power levels (10, 40 and 135 lumens) as well as a beacon mode (flashes about once every two seconds). 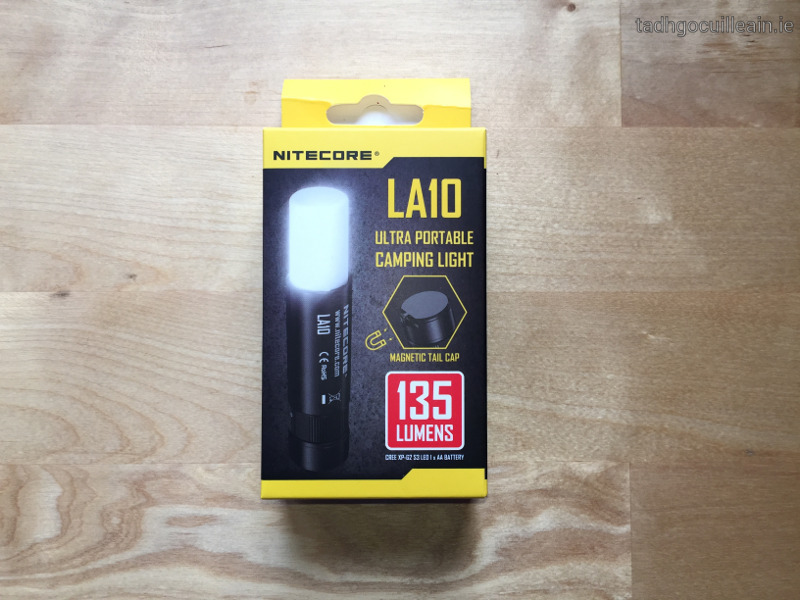 The LA10 comes with two spare O-rings - one is black, for the cover of the battery compartment and the other is clear. I'm not sure what the clear one is for, but I guess it seals near the lens. I haven't opened the lamp to check. It comes with a nice lanyard, which has "Nitecore" embroidered into it, which shows off its quality. There's also an instruction leaflet, a warranty card and a miniature Nitecore brochure. 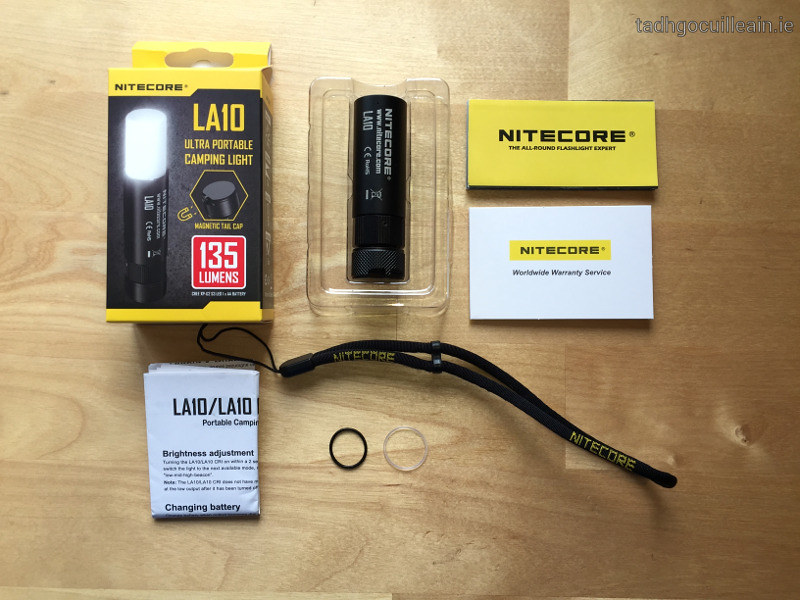 Normally, I prefer torches that use 18650 batteries because they are rechargable and provide a lot of power for their size. As can be seen in the photo below, however, the LA10 is almost as small as an 18650 battery. For hikers and others for whom weight and size is important, the space and weight saved by using an AA battery instead of an 18650 is worth it. 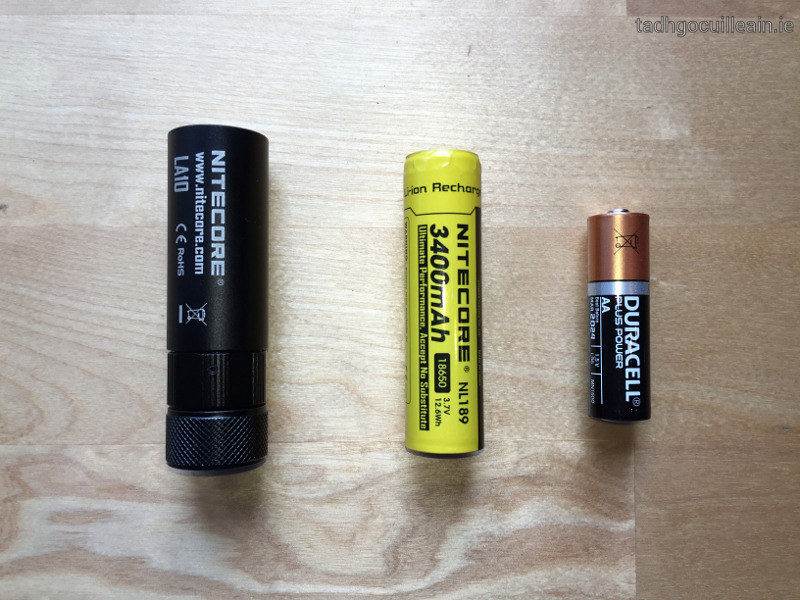 As I mentioned already, the LA10 comes with a nice lanyard. The lanyard has a plastic adjuster which slides up and down to tighten the loop around your wrist or whatever you hang it from. 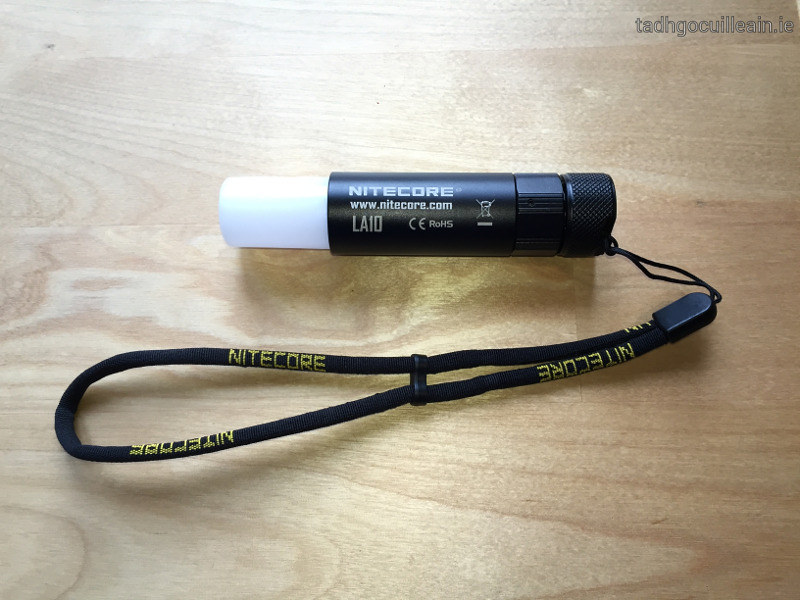 I would suggest attaching the lanyard to the lantern before leaving home because the lanyard hole on the lantern is very small and it's a very fiddly job to thread the lanyard through it. The hole is oval-shaped, so it's important to have the loop turned the correct way when threading it through. I found that using the tip of a cocktail stick to poke it through made it very simple. 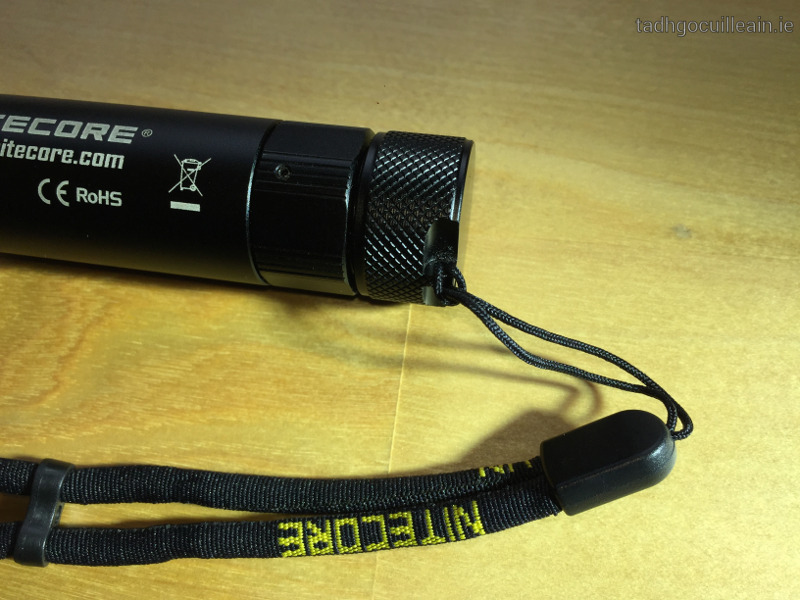 When I first saw the LA10 on Nitecore's website, I misunderstood the "lipstick" function. I thought extending and retracting the "lipstick" lens would turn the lantern on and off, but it doesn't. The lantern is switched on and off by tightening and loosening the battery cap. As demonstrated in the video below, the diffuser/lens can be extended or retracted with the lamp on or off.

I recommend unscrewing the battery cap another half turn after the light has extinguished. Otherwise, the light can switch on momentarily when the base of the battery cap is tapped. This could flatten the battery while the lamp isn't in use, particularly if travelling over rough ground, and may even cause damage to the lantern over time.

At first, I thought the lipstick-style extending diffuser was a gimmick, but it serves a useful purpose. When the diffuser is retracted, the end is close to the LED inside which gives a focused light in one direction. When the diffuser is extended, it throws a softer light in all directions. This is particularly useful when you are holding the light in your hand to see where you are going or what you are doing. As shown in the photos below, retracting the diffuser prevents the light from blinding you when trying to see something behind it. 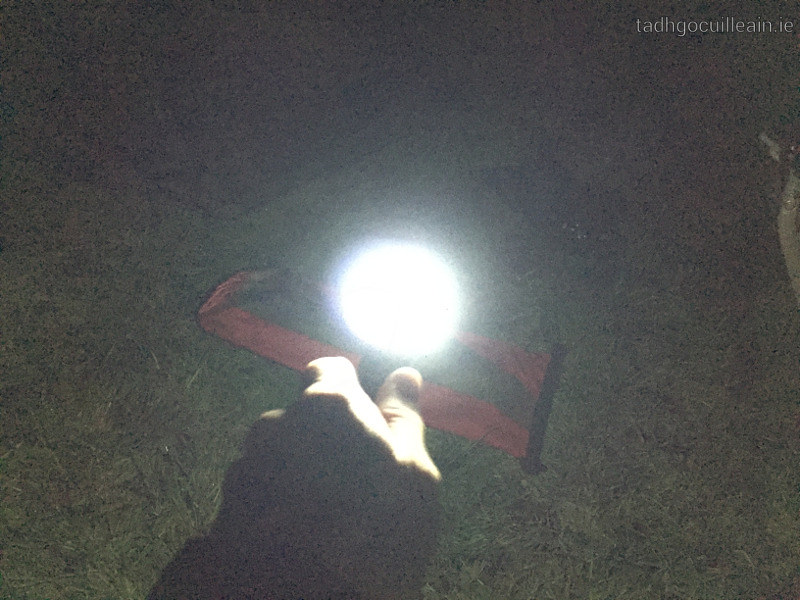 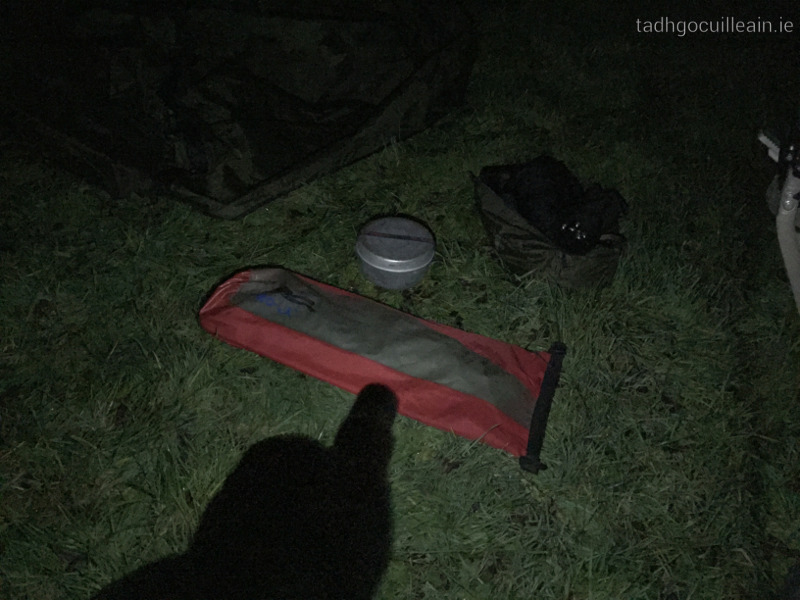 The LA10 has a magnetic base, which is strong enough to hang it horizontally, or vertically upside-down. When I was erecting my tent, I stuck the LA10 to a narrow tube on the pannier rack of my motorbike and it stuck firm, even though it hadn't much surface area to attach to. The tail cap is flat which means it can tail-stand, but it's a bit tall for its width so it is easily knocked over on rough ground. 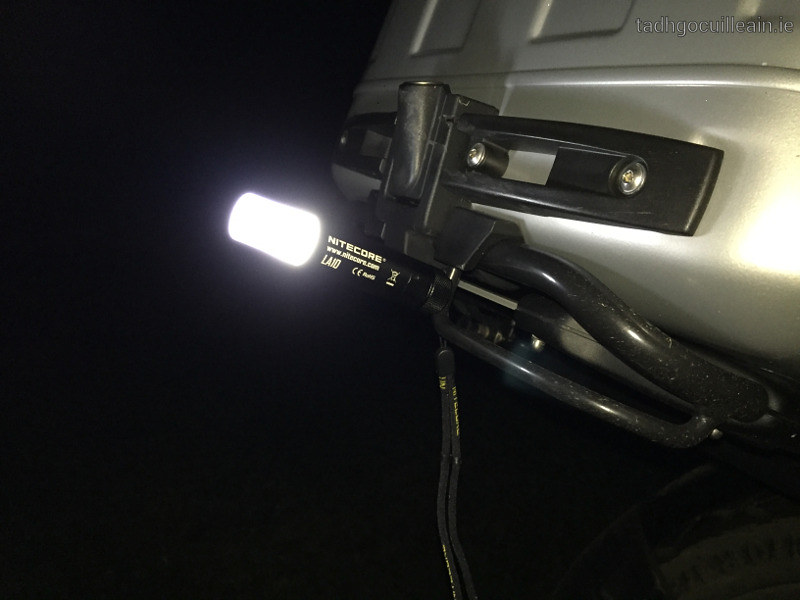 The colour of light from the LA10 is on the cool side of neutral white. This isn't the best colour light for camping because cool white light tends to attract insects. The LA10 could possibly benefit from being a warmer white, although that may slightly reduce its effectiveness.

Here are a few photos I took while erecting the tent. I adjusted the exposure of the photos to represent, as closely as possible, what I was seeing with my eyes. 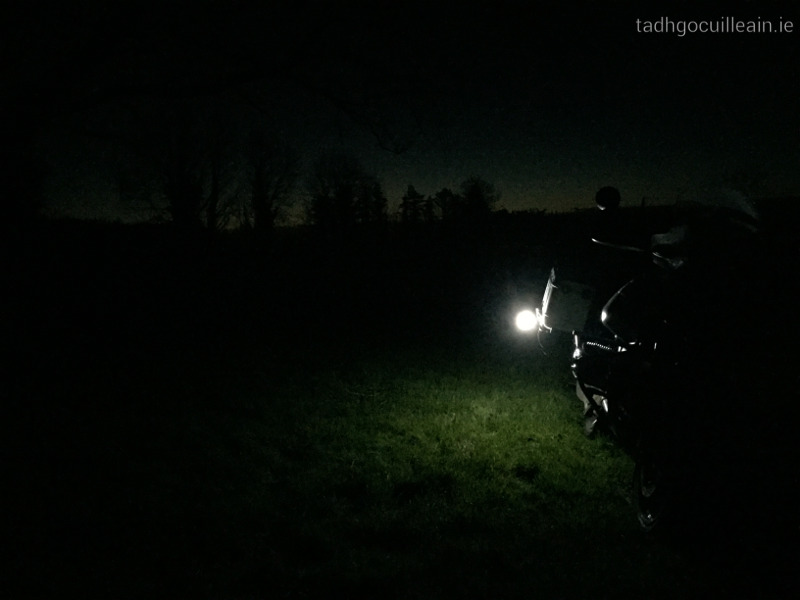 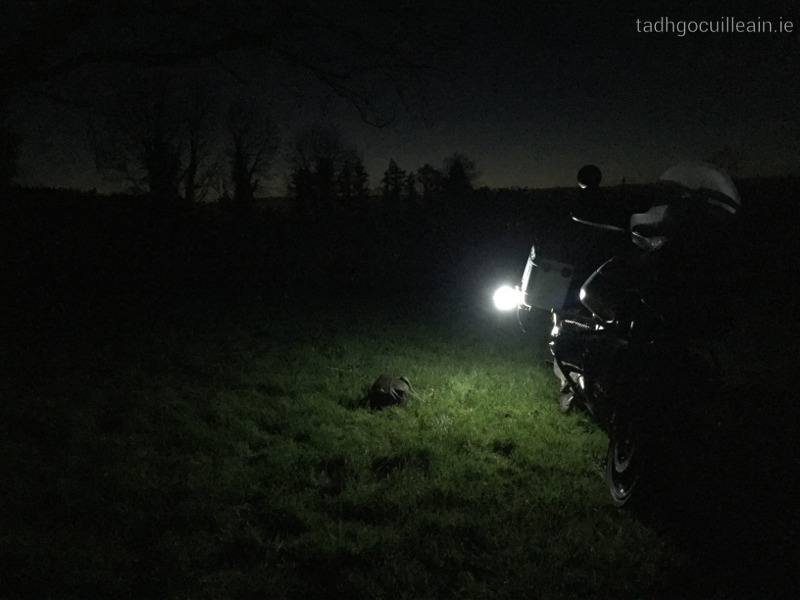 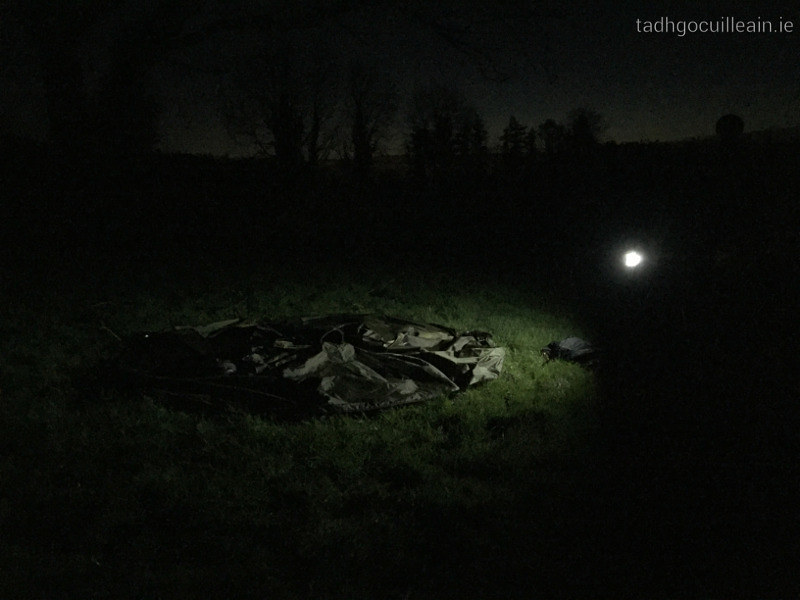 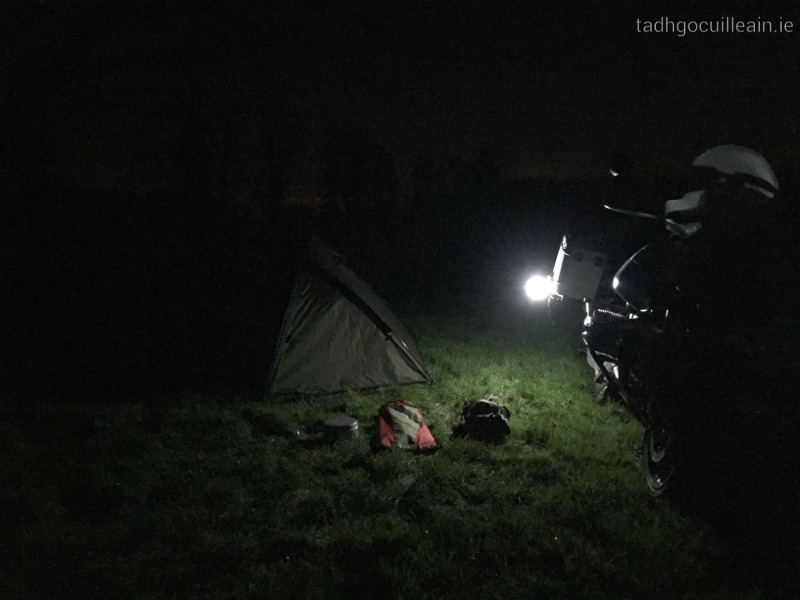 The following two photos show the difference between having the diffuser extended and retracted. With it retracted the light is thrown futher, in a narrower beam. With it extended, the light it thrown wider, but in a shorter range. 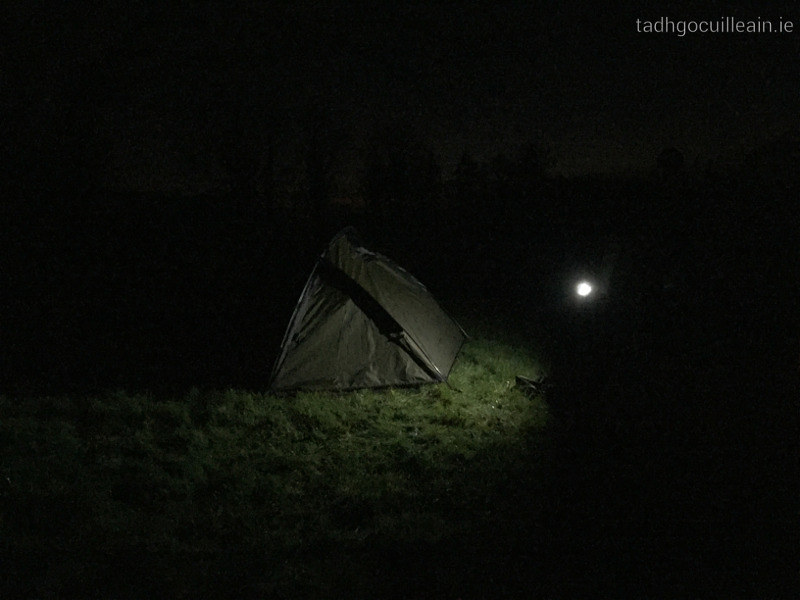 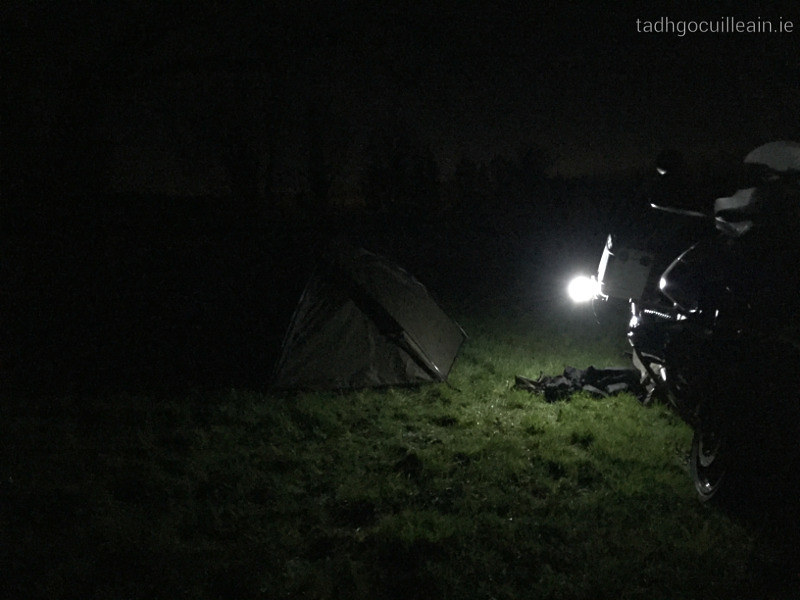 
The LA10 has four different power modes: Low (10 lumens), Medium (40 lumens), High (135 lumens) and Location Beacon (flashes every two seconds). The LA10 always defaults to low mode when it's switched on first. This is useful to stop you from being dazzled when you turn it on first, particularly if you wake during the night. The mode is changed by turning the lamp off, then on again within two seconds, as demonstrated in the video below.

The first time I went camping with the LA10, I forgot that it defaults to low mode and I used it on the lowest setting the whole time. My verdict was that it was adequate, but I wasn't particularly impressed. It was only when I sat down to write the review that it occurred to me that I been using it on Low mode and that I had taken all my photos for the review with the lamp at its lowest setting. When I went out camping the next time, I was more impressed with its performance and took the above photos with the LA10 in High mode. I think it would be a bit better if it had an ultra low mode, such as 1 lumen because even 10 lumens is dazzling when you've just woken up during the night.

As I mentioned earlier, the LA10 weighs only 67g including the battery, which makes it light enough to hang in the tent without it causing the tent to sag. 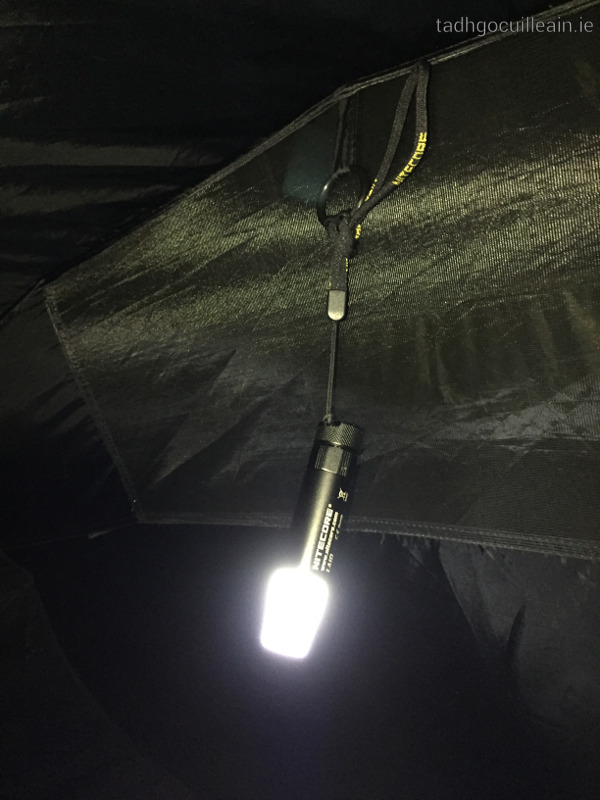 For use inside the tent, there is more than enough light when the LA10 is in Low mode. In fact, I found it dazzling if I had it in the higher modes. 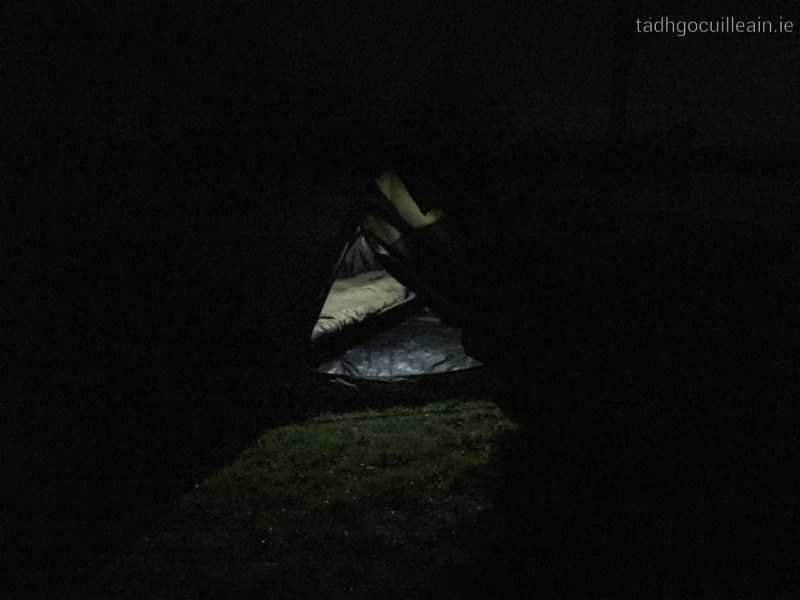 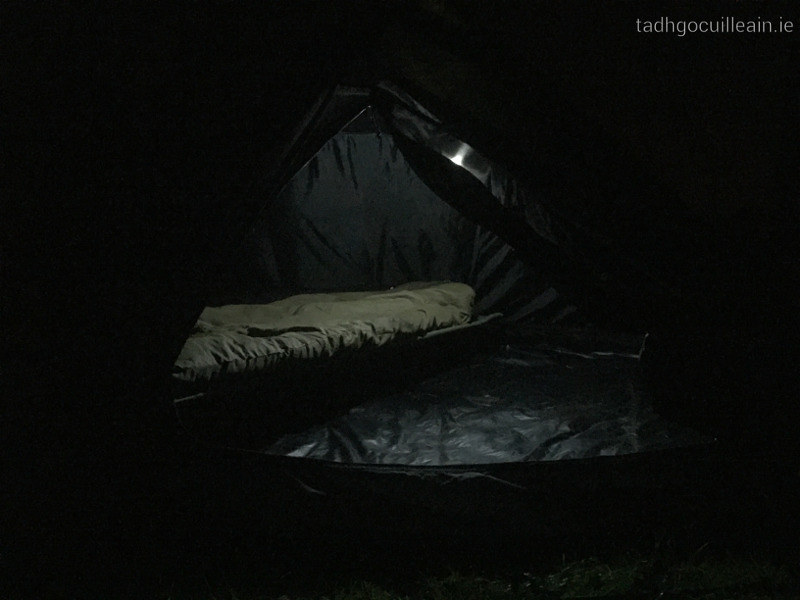 The one problem I had with the LA10 was that twice, when I was quickly switching power modes, I turned it off and on quickly but it didn't light up after turning it back on. The first time it happened I turned it off, waited for about five seconds and switched it back on. It worked fine again after that. The second time it happened, I waited to see if it would light up eventually. After about five seconds it did light up, but every time I tried to change mode it took about five seconds to light up again. As before, switching it off for five or ten seconds solved it. I think switching it off and on rapidly and changing modes a few times in a short period of time "confused" the microprocessor inside and caused it to slow down.

I have another, larger camping lantern which is more powerful than the LA10. As I usually travel by motorbike when I'm camping, size and weight isn't a big issue for me, so in general I'm willing to sacrifice the size and weight for the more powerful lantern. Having said that, regardless of which lantern I use, I also like to bring my Nitecore MH27 for walking, searching for firewood etc. where a focused beam is more useful than the omnidirectional light of a lantern.

The big advantage of the Nitecore LA10 is its small size and light weight. For hikers, climbers and other campers for whom size and weight is important, the LA10 is a great choice. Most people travelling on foot probably wouldn't consider carrying a lantern, as well as their main torch, but the size and weight of the LA10 means it can easily be carried in a pocket. This makes the convenience of a camping lantern a viable option for hikers and climbers.